ZIN (Zsuza Millei, Iveta Silova, and Nelli Piattoeva) discusses her co-edited volume, Childhood and Schooling in (Post) Socialist Societies: Memories of Everyday Life. You can listen here. Other episodes of the SHCY podcast are available at our podcast website, or you can subscribe on Google Podcasts, Apple Podcasts, Spotify, and wherever you get your podcasts.

Childhood and Schooling in (Post)Socialist Societies: Memories of Everyday Life

Were schoolchildren in socialist lands icons of the future or victims of the state? Models of modernity or manipulated conformists? Empowered or oppressed? The answer is yes . . . and no. Childhood and Schooling in (Post) Socialist Societies: Memories of Everyday Life is a unique, interdisciplinary collection of essays aimed at complicating a number of “master narratives” about modern childhood and (post)socialism derived from official state and Cold War discourses by examining the lived experiences of children (4). To do so, the editors of Childhood and Schooling asked contributors to plumb their own memories of school-age childhood in socialist contexts, the result of which is a “living kaleidoscope of memories” replete with “ambiguities and complexities” that challenge a static view of socialist childhood (2, 4, 9).

Any work that claims to investigate lived experience must tackle the problem of evidence, an especially thorny task in exploring children’s lives. Childhood and Schooling deals with this challenge in a highly original way. In ten essays, academics from a variety of fields, all of whom grew up during the latter decades of the twentieth century in (post)socialist countries, act as their own evidence. Employing relatively emergent methodologies, autoethnography and collective biography, the authors analyze their own memories of childhood, school, and daily life. Geographically, the essays cover several Eastern European countries, three Soviet republics, Vietnam, and China. Four of the ten chapters are collaborative and thus comparative, increasing the scope and usefulness of the book.

What we get are “unexpected glimpses into the everyday mundane life of children under socialism” that are used to illustrate both child agency and the limits of binary thinking about life under socialism as either uniformly joyful, liberated, and modern or uniformly repressive, state-controlled, and backward (273). We read about school plays and Pioneer prizes, homeschooling and disabilities, uniforms and hair bows, sex education and sports, panda bear pens and dance troupes. We find active children who, through everyday acts, defied simplistic models of childhood. They resisted some state aims while embracing others, found their own ways to make sense of shifting political contexts, or participated in state acts for personal motives. Collectively, the essays affirm that “living socialism often meant something quite different compared to the official interpretations offered by state officials and academic researchers” (2).

Two chapters by the editors bookend the ten essays, serving as introduction and conclusion, though they are not labeled as such. Befitting their stated desire to avoid having a “single voice close the book,” the editors include not one but five afterwords from scholars in five different fields (259). The multiple afterwords reproduce the best of what a constructive conference panel does: they provide a variety of thoughtful perspectives on the significance of the work as whole and raise good questions for future consideration.

Multiplicity is a key theme for this book, from chapter one to the final afterword: socialist childhoods, emphasis on the “s,” are under investigation. No urge to universalize here, but to press the individual experience and its interpreted meaning to the limit. The book’s approach will not lack critics who argue that autoethnography focuses too narrowly, can be easily influenced by the scholarly agenda, and lacks methodological clarity. As an example of the latter, Jinting Wu’s captivating chapter on non-school-bound pedagogy in China’s Cultural Revolution is based largely on her mother’s experiences, not her own, blurring the distinction between autoethnography and oral history. Though problematic, the contributors have successfully shown another way that memories of childhood can reveal lived experience. In this context, when the whole point is to show exceptions to the rules, it works.

This book should be of interest to scholars in a variety of fields, but particularly to historians of childhood, education specialists, and social scientists. Heavy use of theoretical jargon makes for difficult reading in some chapters, but this is often tempered by engaging narratives of personal memories. Selected chapters, such as those written by Anna Bogic, Alfiya Battalova, Violette Hoang-Phuong Ho, and Wu, are appropriate for use with undergraduates, owing to the narrative style and clarity of theoretical discussion. The editors appear to have designed the collection for precisely such pull-out purposes, as evidenced by the definition of autoethnography in each essay. Though the editors claim to “bring [the essays] into dialogue,” this dialogue is only with the editors’ vision for the project, not among the essays themselves (238). I missed the cross-referencing that usually accompanies such a cohesive collection.

As a whole, the book makes a powerful argument against viewing (post) socialist life as a series of simple dichotomies or children in (post)socialist contexts as vessels passively filled by state institutions or ideologies, thus joining an increasing number of recent works that point out the insufficiencies of such frameworks for understanding what it meant to live (post)socialism. 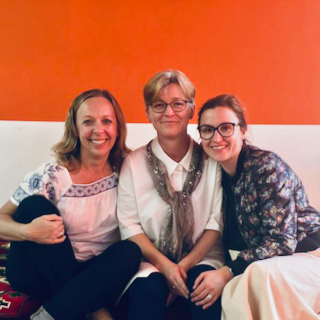 Mnemo ZIN is a composite name for Zsuzsa Millei (Tampere University), Iveta Silova (Arizona State University), and Nelli Piattoeva (Tampere University). By adopting a collective name, we foreground our entangled, perpetual becoming-with as researchers and human beings who refuse to single out or rank our contributions. Our collective name is inspired by the figure of Mnemosyne from Greek mythology, goddess of memory, daughter of Gaia, and mother of the nine Muses. Spanning over almost ten years, our research examines childhood memories through the collective biography method, writing alternative histories and informing our current thinking about (post)socialist and (de)colonial pasts, presents, and futures. Her co-edited book ‘Childhood and Schooling in (Post) Socialist Societies: Memories of Everyday Life’ by Palgrave Macmillan and other articles and artistic explorations related to the Re-connect / Re-collect: Crossing the Divides through Memories of Cold War Childhoods project can be found on the website www.coldwarchildhoods.org

Zsuzsa Millei is a Professor of Early Childhood Education at the Faculty of Education and Culture, Tampere University, Finland and Visiting Professor at the Faculty of Education, University of Gothenburg, Sweden where she leads the Nationalism and Childhood group under the Global Childhoods Network. Her research addresses child politics by exploring how politics (power, government, nationalism, and ideology) intertwine with childhood and children’s everyday life in child institutions. In her project on Microbial Childhood she aims to bring contemporary social theory and biological discoveries into transformative childhood studies. Her comparative studies of nationalism and explorations of childhood memories of (post)socialist societies use post-qualitative and artistic methods and reveal complex matrices of power and seek to decolonize the research imagination and knowledge production. She has recently edited a special issue on ‘Banal and everyday nationalisms in children’s mundane and institutional lives’ in the journal of Children’s Geographies.

Nelli Piattoeva is an Associate Professor at the Faculty of Education and Culture, Tampere University, Finland. Her research looks at how forms of digitalisation, quantification and surveillance integrated into national large-scale assessments of education quality act as technologies of education governance at a distance. She is also a co-investigator on a research project that seeks to re-narrate socialist and post-socialist histories in general and childhood and schooling under socialism and post-socialism in particular through memories of cultural insiders and decolonial and artistic research practices. Her previous works have been published, among others, in Critical Studies in Education; Journal of Education Policy; Comparative Education Review; and Learning, Media and Technology. Nelli has recently joined Critical Studies in Education as Associate Editor.

Iveta Silova is Professor and Associate Dean of Global Engagement at Mary Lou Fulton Teachers College at Arizona State University. She holds a Ph.D. in comparative education and political sociology from Teachers College, Columbia University. Her research focuses on globalization and postsocialist education transformations, including intersections between post-colonialism and post-socialism after the Cold War. Iveta’s most recent research engages with the decoloniality of knowledge production and being, childhood memories, ecofeminism, and environmental sustainability. Her latest books include Globalization on the Margins: Education and Post-Socialist Transformations in Central Asia (2020, co-edited with Sarfarox Niyozov), Comparing Post-Socialist Transformations: Purposes, Policies, and Practices in Education (2018, co-edited with Maia Chankseliani), and Reimagining Utopias (2017, co-edited with Sobe, Korzh, & Kovalchuk). She is an associate editor of Education Policy Analysis Archives.