Welcome to the new Featured Books section of the revitalized SHCY website. In our seventh instalment, we revisit Racial Innocence: Performing American Childhood from Slavery to Civil Rights by Robin Bernstein.

Robin Bernstein’s most recent book, Racial Innocence: Performing American Childhood from Slavery to Civil Rights (New York University Press) came out in 2011 to broad acclaim, winning numerous major awards, including the Society for the History of Children and Youth’s, Grace Abbott Best Book Award.  Using innocence as an analytical lens, Robin’s book offers a powerful reappraisal of the history of American childhood, arguing that ideas of innocence were employed to support a range of racist ideologies and practices in the 150 years after the Civil War.  Theoretically ambitious and meticulously researched, the book impresses on many levels. Robin’s articulation of racial innocence—the idea that innocence was not applied universally to American childhood but rather selectively, designating white children and black children as fundamentally different— serves to bind the strands of her analysis together.  As some critics have alluded, and Robin herself points out in this interview, Racial Innocence is, in itself, not a new concept, and one of this book’s most impressive accomplishments is using what’s already known to provide profound new insights about the history of race and childhood in America.

Our conversation featured a substantial consideration of historical methods.  The considerable theoretical heft of Robin’s work impressed me the first time I read Racial Innocence, especially her refitting of the archive and the repertoire as analytical tools.  What impressed me more, though, was how effectively she puts theory into practice.  We talked about this in some depth, retracing Robin’s steps as she built her central argument about Racial Innocence.  She described how early research efforts gave shape to this foundation piece and talked about being in a “constant dialectical relationship” to the evidence she encountered.  This idea, and her process overall, seems especially useful to me, establishing a viable general framework for approaching the history of childhood and children’s culture. It helped shed light on how the methodologies Robin employs in Racial Innocence, such as the notion of scriptive things, worked for her, and provided useful cues as to how they could work for others conducting archival research.

In our discussion of historical research on children’s culture, Robin challenged the idea that there’s a paucity of evidence about childhood and children’s lives—at least certain kinds of evidence.  The challenge, she maintained, is how to best approach that evidence.  Robin’s work in Racial Innocence provides not only an example of how to do that, but a useful set of tools for other scholars.  She stressed that providing such tools was one of her goals for this project.  Taking things a step further, she exhorted more scholars to do the same, working to create scholarship that’s not, as she put it “hermetically sealed,” but, rather, that can be easily used and adapted to fit a range of scholarly approaches and projects.  Robin’s stance here may not be unique, but it’s refreshing to see a scholar of her standing argue so forcefully for modes of historical research that promote accessibility and invite collaboration.

Finally, Robin and I spent some time discussing the legacy of Racial Innocence and the different ways this idea informs her current work.  Currently, she is writing a book inspired, at least partially, by the Trayvon Martin case, entitled White Angels, Black Threats: How Stories about Childhood Innocence Influence What We See, Think, and Feel about Race in America.

Robin Bernstein is Professor of African and African American Studies and of Studies of Women, Gender, and Sexuality at Harvard University and co-editor of the book series Perfor 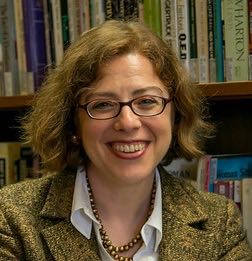 mance and American Cultures for New York University Press.  Her most recent book, Racial Innocence: Performing American Childhood from Slavery to Civil Rights, won five awards: the Outstanding Book Award from the Association for Theatre in Higher Education (ATHE, co-winner), the Grace Abbott Best Book Award from the Society for the History of Children and Youth, the Book Award from the Children's Literature Association, the Lois P. Rudnick Book Prize from the New England American Studies Association, and the IRSCL Award from the International Research Society for Children's Literature.  Racial Innocence was also a runner-up for the American Studies Association's John Hope Franklin Publication Prize and received an Honorable Mention for the Book Award from the Society for the Study of American Women Writers. Her other books include the anthology Cast Out: Queer Lives in Theater (University of Michigan Press) and a Jewish feminist children's book titled Terrible, Terrible!. A refereed ebook, African American Children and Childhood, is forthcoming from Oxford University Press.  She is currently writing a book titled White Angels, Black Threats: How Stories about Childhood Innocence Influence What We See, Think, and Feel about Race in America.