Listen to Qiana Whitted, Professor of English and African-American Studies at the University of South Carolina, converse with co-editors Brittany Tullis and Mark Heimermann about their collection, Picturing Childhood: Youth in Transnational Comics. Or browse other episodes of the SHCY podcast, here.

I have to admit that I struggled a little bit with this collection. As is typical of most essay collections, the work can be hit and miss—but that wasn’t the particular source of my confusion. Rather, the first thing that I asked in my reading notes was “is this a book about comics that feature children or a book about comics for children?” The subtitle, “Youth in Transnational Comics,” certainly suggested the former, but the essays seemed to stem from both approaches at the same time. More troubling was the specific use of the term “transnational.” While it is absolutely true that there are well developed cartooning traditions about and for children around the globe, I was unclear how the editors might mobilize the term “transnational” in distinction with “international”; how they might conceptualize children’s comics operating across and between national boundaries. While several examples immediately suggested themselves (the development of Disney characters in Italy and Sweden, for example), it was not immediately clear to me how this volume might trouble the centrality of American comics within English-language comics scholarship, and, indeed, I was a tad disappointed to see that it does not. While the editors promise a volume that is “comprehensive (but not exhaustive),” this is impossible to accomplish in a book that is so focused on a single national tradition (10). Of the thirteen essays in the volume, fully eight of them focus on comic books and strips produced in the United States, with only a small amount of space addressing work from Finland, Argentina, Japan, and France. Moreover, only a few of the essays actually address the transnational circulation of comics—the majority focus on discrete local or national examples.

Some of the strongest work in this volume outlines material that is little discussed in English-language scholarship on comics. Ralf Kauranen, one of the founders of the Nordic Network for Comics Research (a leading institute in the field), provides an outstanding overview of the use of comics in Finnish propaganda during World War II. This well-written and informative essay provides important historical insights into a cultural phenomenon of which many scholars will be completely ignorant. Annick Pellegrin’s close reading of the work of Fabien Vehlmann within the context of five decades’ worth of publishing for children in Belgium is a lovely model of textual interpretation that will add important social and cultural context for readers coming to the author’s work through recent translations into English. James Nobis’s reading of Osamu Tezuka’s Ayako is an interesting essay that sometimes feels like an outlier in this volume. Relying on the semiotic approach developed by Gunther Kress and Theo van Leeuwen, Nobis reads the text on the level of image analysis while most of the other contributors take a more traditionally literary approach. All this is to say that Picturing Childhood is something of a mixed bag in methodological terms. When the majority of the contributions feature textual analysis rooted in the close reading of exemplary texts, essays like Kauranen’s take the volume in unexpected directions.

Given that there are thousands, possibly tens of thousands, of comics worldwide about and for children, the selection of works on hand here defies easy categorization. There is no strong rationale for some of the choices, which means that essays occasionally sit uneasily next to each other. Many of the essays are about comics that are about children: Tamryn Bennett discusses children in the work of acclaimed post-underground cartoonist Lynda Barry; co-editor Mark Heimermann writes about the work of Canadian cartoonist Jeff Lemire; C. W. Marshall discusses the comics of Paul Hornschemeier; co-editor Brittany Tullis contributes a chapter on Quino’s well-known Argentinean newspaper strip, Mafalda. While each of these chapters offers some interesting insights (and Marshall’s, with its strongly philosophical focus, is intriguingly unlike the others), two essays particularly stand out as offering important contributions. First, Christopher Hayton and Janardana Hayton offer an analysis of Tiny, a young African-American character introduced into Harvey Comics’s Little Audrey title in 1953. Theorizing Tiny through the lens of integration and family life, the Haytons bring a little-known supporting character to the fore in an exceptionally insightful essay. Similarly, Qiana Whitted, writing in the chapter immediately following, focuses on comics that presented the brutal 1955 murder of Emmett Till. In her essay, Whitted addresses the New York Age newspaper strip, Tommy Traveler in the World of Negro History, a work that is little recalled (a long out-of-print collection was published in the early 1990s). Both of these essays are absolutely first-rate, offering nuanced and informative readings on works that are almost never discussed in the literature.

Picturing Childhood is at its best when its contributors are exploring new ground and when they shine the spotlights of historical analysis and close reading on under-researched topics. While the book struggles to actualize the promise of its title, the best work included here makes it a worthwhile text.

Brittany Tullis is Associate Professor of Spanish and Women and Gender Studies at St. Ambrose University. Her work 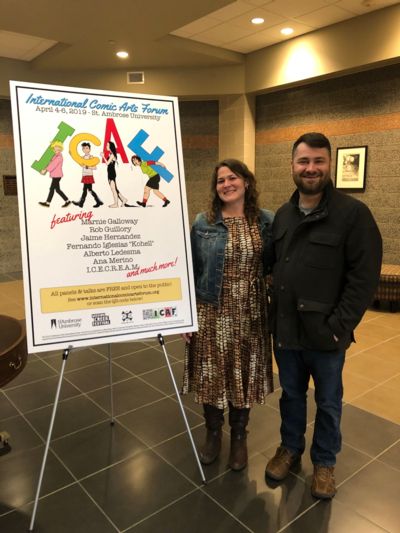 Mark Heimermann and Brittany Tullis at the International Comic Arts Forum in 2019.

Mark Heimermann is Assistant Professor of English at Silver Lake College of the Holy Family. He researches depictions of grotesque children in contemporary comics and literature. Heimermann is the co-editor of Picturing Childhood: Youth in Transnational Comics, which was nominated for the Eisner Award for Best Academic/Scholarly Work in 2018. Heimermann’s research has also been published in the journals Fantastika and Journal of Graphic Novels and Comics and in the anthologies Misfit Children: An Inquiry into Childhood Belongings and The Child in Post-Apocalyptic Cinema.