Welcome to the Featured Books series on the revitalized website for the Society for the History of Children and Youth. Our twelfth addition to this series is Colleen Vasconcellos' monograph, Slavery, Abolition, and Childhood in Jamaica, 1788-1838.

Please listen here for the interview with Colleen Vasconcellos and the Library Department Assistant-Associate at the University of West Georgia, Jennifer Sutton. Or browse other episodes of the SHCY podcast, here.

Few studies explore the ways in which slave society shaped the experiences of enslaved children in the Atlantic World. With the exception of Wilma King’s Stolen Childhoods and Marie Jenkins Schwartz’s Born in Bondage, which both focus on enslaved childhood in the antebellum South, scholars often discuss enslaved childhood as a subset of labor, reproductive health, mother-child relationships, and the slave family.

Well researched and elegantly written, Colleen Vasconcellos’s Slavery, Childhood and Abolition in Jamaica broadens Atlantic discussions of childhood by providing insights into the political, socioeconomic, and cultural factors that shaped enslaved children in the British Caribbean. Unlike their counterparts in the US South, Caribbean planters believed that enslaved infants and children were a financial burden and therefore, prior to 1788, opted to import slaves rather than promoting reproduction. Accordingly, enslaved children were subject to different labor perspectives and experiences than their counterparts in the US South. Abolitionism forced planters to adopt practices aimed at promoting reproduction and the survival of enslaved children who would eventually transition into adulthood.

Although scholars recognize that abolitionism, apprenticeship, and emancipation altered the oligarchy’s approach to labor acquisition and retention, gender, reproductive health, and slave families, it was never clear how political and economic changes as well as labor policies affected the lives of enslaved children. Vasconcellos uses available court records and other important archival material to reveal that enslaved children were social actors who committed thefts, disturbed the peace, and directed acts of violence towards their owners.

Vasconcellos is at her best in her discussion of the stages of childhood and its impact on girlhood. She argues that one of the most significant consequences of the abolition campaign was the creation of new stages of childhood. Planters used labels such as man-boy and woman-girl to refer to fourteen- and fifteen- year-olds entering adulthood, while sometimes girls as young as thirteen years old were added to plantation inventories as breeding wenches and belly women (31). Because of planters’ preoccupation with population growth, girls twelve and older came to be viewed as sexual subjects (44). An 1816 law making the sexual abuse of enslaved ten-year-old girls punishable by death was rarely upheld and was rendered virtually useless, since enslaved persons could not testify against white persons.

Interestingly Vasconcellos’s analysis overlaps somewhat with King’s and Schwartz’s assessments of enslaved childhood. Like King, she argues that the needs of the plantation stole or cut short enslaved children’s childhood. During abolitionism, planters shortened girlhood to a period of five years (from age five to ten), after which they transitioned into adulthood by becoming breeding wenches. By 1834, planters worked apprenticed children as hard as adults when they realized that children would never make it to the first gang. Unfortunately, we do not get a clear sense of the impact of these policies on boyhood and mas- culinity. Planters’ attitudes towards enslaved children changed in response to external political and economic events. Like Schwartz, however, Vasconcellos argues that enslaved mothers, white fathers, and children contested and resisted planters’ efforts to shape enslaved children into productive adults.

The study provides insight into how enslaved parents and white fathers attempted to assert control over their children’s lives. In chapter 2, Vasconcellos posits that mulatto children played a key role in reinforcing social stratification. For many enslaved persons, a child’s proximity to whiteness potentially improved the social and economic quality of life of both mother and child when white fathers assumed economic and social provisions for their children. In chapter 3, the author explores West African retentions in Jamaica and contends that the use of African day names and the existence of games and folklore reflect parents’ efforts to shape their children’s identities amidst planters’ efforts to counter African practices and religion through the introduction of missionar- ies. Shortened by labor and economic policies, childhood was also a culturally, socially, and politically contentious time of life for an enslaved population aged five to fifteen years.

Scholars of the British Caribbean do not have an archive similar to the Federal Writers Project, which has played an important role in shaping cur- rent literature on African American childhoods in the late nineteenth and early twentieth century. Most Caribbean slavery records are produced by adults and portray European reflections on the experiences of Africans and enslaved per- sons on the estates. While the court records Vasconcellos has fruitfully mined provide some evidence of children’s resistance, they rarely if ever speak for themselves, thus leaving us with very little notion of their consciousness. This is an issue with which scholars doing histories of Caribbean childhood in slavery must contend. Vasconcellos’s work, however, provides a comprehensive and accessible narrative on the impact of abolition, apprenticeship, and emancipa- tion on the lives of enslaved children.

A Fulbright Scholar, Dr. Colleen A. Vasconcellos graduated with her Ph.D. in Atlantic Studies from Florida International University in Miami, Florida in 2004.  She is an associate professor of history at the University of West Georgia in Carrollton, Georgia, where she also serves as an advisor for the Africana Studies Program and Minor and is a member of the Women’s Studies 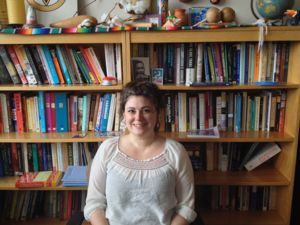 and Latin American Studies faculty. While her teaching focuses on the history of the Atlantic World, comparative slavery and emancipation, Latin American and Caribbean History, and women and girls in the Atlantic World, her research largely centers on the history of enslaved girls and youth in eighteenth-century Jamaica.  Her first book, a co-edited anthology with Jennifer Hillman Helgren entitled Girlhood: A Global History was published by Rutgers University Press in 2010.  Her second book, Slavery, Abolition, and Childhood in Jamaica, 1788-1838 was published by the University of Georgia Press in 2015 as part of their Early American Places series.  She is currently examining the intersecting lives of three enslaved girls in Jamaica in the late eighteenth and early nineteenth century.