Welcome to Day 5 of A Year in a Week. This week we explored the SHCY’s first full year of content since shifting to our new website in the winter of 2018. On our final day of review, we look back at our biennial conference and the content that came with it.

The Society for the History of Children and Youth hosts an international conference every two years. This year, we had the incredible fortune to convene at Australian Catholic University in Sydney, Australia, for three days from 26 to 28 June 2019. The theme of the conference was “Encounters and Exchanges.” We had one keynote address, three plenaries, sixty sessions and around 238 session participants (including chairs, speakers, and roundtable attendees, not discounting repeats)!

Thanks go to Emily Vine for the photos in this post.

Our first plenary participants were: Shurlee Swain, Joy Damousi, Naomi Wolf, and Lynelle Long. The roundtable focused on the historical experiences of adopted children in mid-twentieth century Australia, including an interrogation of simplified narratives of success and happiness in stories of child adoption.

Shurlee Swain is an Emeritus Professor whose historical acumen has facilitated government analysis of child welfare practices in Australia.

Joy Damousi is a professor of History and ARC Kathleen Fitzpatrick Laureate Fellow at the University of Melbourne. Her present research is focused on the history of children refugees and Australian internationalism in the twentieth century.

Naomi Wolfe is an Aborginal academic at ACU who previously co-ordinated the ACU Jim-Baa-Yer Indigenous Unit who works toward bridge building between Indigenous and non-Indigenous communities in Australia.

Lynelle Long is a Vietnamese adoptee who arrived in Australia in the early 1970s and was adopted into a white family in regional Victoria. She is the founder of InterCountry Adoptee Voices (1998), and has contributed to the 2005 Australian House of Representatives Inquiry into adoption of children from overseas.

The second plenary participants were: Sana Nakata, Patrick J. Ryan, Marek Tesar, and Thom Azelsson. The session asked a diverse group of scholars, across disciplines and regions, to answer the question “what does the concept of governmentality offer the historical and political analysis of childhood and youth.” 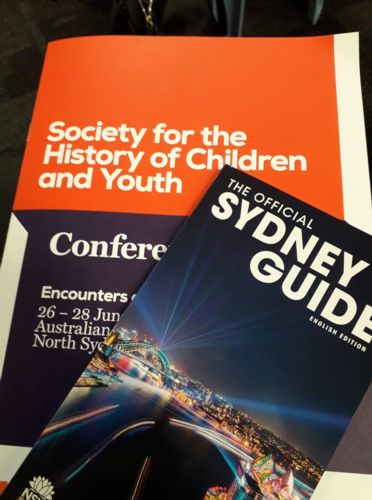 Sana Nakata, a political science lecturer at the University of Melbourne, dissected how governmentality regulated a relationship between power and freedom. She discussed the limitations of either power or freedom to completely eradicate or devaluate the other in discussions of governmentality and childhood.

Patrick Ryan, a professor at King’s University College at Western University in London, Canada, and the online editor for the SHCY. He suggests shifting from a perception of governmentality as theory to governmentality as discourse. In addition to connecting population management and the production of subjectivity, he analyses how the legal concept of neglect, as it pertains to Anglo-American legal frameworks, has shifted the location and responsibility of children’s work in the early twentieth century U.S.

Marek Tesar is a professor in the faculty of Education and Social Work at the University of Auckland. He seeks to prove the subjectivity in governmental research by analysing childhood histories in ideologically based societies. He aims to show that in these societies both the researcher and the subject have individual subjectivities that influence the outcome of research, and subsequently forces us to question the ethics of archival research in childhood history studies, in the context of power and agency.

Thom Axelsson is a senior lecturer at Malmö University, Sweden. He researches the history of education and childhood through a Foucauldian lens. He has given academic attention to the construction of deviancy in childhood, as well as good citizenship as defined by religious communities in the United States.

Third Plenary Session: 30th Anniversary of the UN Convention on the Rights of the Child

Our third and final plenary of the conference included: Megan Mitchell, Sana Nakata (joining us for a second plenary, overall), Nanette Louchart-Fletcher, and Isobelle Barette Meyering. 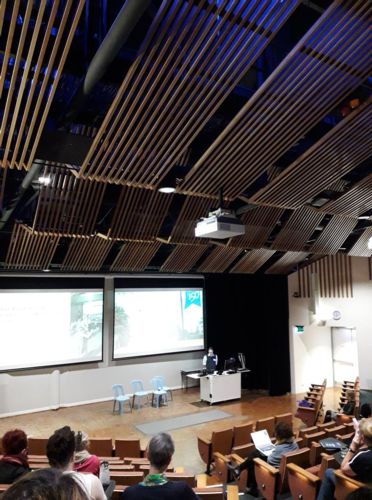 Sana Nakata is a lawyer and a political theorist. She has published Childhood Citizenship, Governance and Policy (Routledge 2015). She has an ARC Discovery Indigenous grant, which investigates “Representations of Children in Australian Political Controversies.”

Nanette Louchart-Fletcher is the Creative Producer of Families & Young People, the Museum of Australian Democracy at Old Parliament House in Canberra. She developed a permanent children’s exhibition themed on the UN Convention of the Rights of the Child.

Isobelle Barette-Meyering is a professor at Macquarie University, whose present research projects include “Contested Childhoods: A History of Children’s Rights in Australia (1959-2013).” She has previously researched children’s liberation in context of Australian feminist movements. At present she is the secretary of Oral History New South Wales and she is a founding member of the editorial collection History in the Making.

Chris Brickell is Head of the Sociology, Gender Studies and Criminology Programme at Otago University, New Zealand. His keynote address, Teenagers: The Rise of Youth Culture in New Zealand traces the incongruencies and conflicts of youth culture at the turn of the century.

You can watch to Chris’ keynote, here. Or you can listen to our podcast episode, here.

A Reflection on SHCY’s 2019 Conference: Encounters and Exchanges

Many thanks go to Emily Vine, a doctoral student at Queen Mary University of London, for her reflective piece on the 2019 conference. Emily reflected on the conference’s efforts to acknowledge its occupation of traditionally Indigenous land, the role of children in shaping statehood and nationhood, a re-cap on the plenary sessions and their contents, the influence of Sana Nakata’s contributions to the conference, and the overall importance of studying childhood.

Mary’s dissertation is titled “Birth, Death, and Domestic Religion in London, 1600-1800.” She is the recipient of an AHRC collaborative doctoral award.