Please note: details about each photograph are available here. You can also click each photo and it will direct you to the relevant caption record at the bottom.

On 11-12 July 2019, New Europe College–Institute for Advanced Study in Bucharest hosted an international workshop entitled ‘A Forgotten Consumer. Children and Material Culture in 19th Century South-Eastern Europe.’ The event was organised in the frame of the European Research Council project ”Luxury, Fashion and Social Status in Early Modern South-Eastern Europe” (LuxFaSS), on which one can find more on http://luxfass.nec.ro/home.

Material culture was a constant presence in children’s lives throughout centuries, but specially dedicated lines of production emerged only in modern times and are often associated with late nineteenth–early twentieth century. Still, recent research proved that the integration of children into consumer culture began earlier and was a continuous process of balancing between child-rearing patterns and family demands with State intervention and corporate economic aspirations. Current historiography almost always looks at Western Europe and the world beyond the Atlantic and puts aside the situation in South-Eastern or Central Europe. For this reason, these children remain what might be called a category of forgotten consumers within a global discussion on the topic. A look at these regions can reveal how children as consumers emerged and developed within similar political contexts, since many these current nation states were provinces of Ottoman, Austrian and Russian Empires during the period. The coexistence of different cultural models, the rise of nationalism, and the struggle for integration in the economic global market reveal differentiations and assert a certain specificity.

Thus, the workshop that took place in Bucharest in July 2019 had the intention to explore the following themes:

The Industrial Revolution brought new developments and a mass production that aimed at children as well as adults. At first through parents, but later on addressing directly to children and youth, press and literature emphasized the values of consumer culture in a manner that had to meet the State ideal of future citizens. This theme looks at the advertising strategies & the synthesis between different cultural values aimed at children in both private and State magazines, pedagogical ones included, etc.

Domesticity and middle-class ideals about child-rearing and education led to an increased and direct parental control over children, which affected their goods consumption. This theme asks us to consider how families used goods to achieve a social class ideal, to bond with their children, and to improve their quality of life.

4. Remembering the pleasures of the little ones: leisure time, material culture and children.

Most of the testimonies come from adults, while children themselves leave only few written traces on how they related with their material world. Researching autobiographical sources, correspondence and museum artefacts proved to be a path towards a reconstitution on how children played, socialized in various family and public events, and created affective bonds with their possessions.

Specialists came from France, England, Germany, but also from Romania, Bulgaria, Poland or Israel. Their presence allowed for a comparative approach in two ways. Firstly, there was a comparison between the centre & periphery with reference to the propagation of different cultural models within the Ottoman and Austrian Empires. Secondly, the discussion offered the opportunity to compare the situation between East and West on the topic of children and material culture. 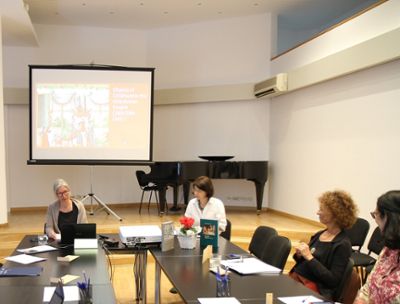 The two lectures that opened each day of the workshop were relevant in this sense:

The event followed a line that went from a centre-periphery discussion to the use of material culture in the pedagogical and ideological education, quite visible at the end of the 19th century. Children’s objects were items invested with symbolic meanings both for the elite and in the emergent middle-class families from the provinces. The import of a Western consumerist culture in the East gave room for different responses, including one that underlined its negative moral features and the need to locally adapt it.

For more information on the papers see the programme.

Nicoleta ROMAN (PhD), is researcher at "Nicolae Iorga" Institute of History–Romanian Academy and Scientific Assistant within the ERC project, Luxury, Fashion and Social Status in Early Modern South-Eastern Europe, hosted by New Europe College. Within the ERC project she explores the material world of women in 18th and 19th century Romanian Principality of Wallachia and the cultural history of childhood.

As historian her areas of expertise are: social and cultural history; women, family and childhood history; microhistory and history of premodern and modern Romania and the Balkans. Starting from her PhD thesis on women in 19th century Wallachia, she developed an interest on two related subjects, childhood history and welfare system in Romanian space. In 2011, she gained a post-doctoral research grant offered by Romanian National Research Council (CNCS), Shaping a Social Identity. Orphans and Child Abandonment in Wallachia (1800-1860). Afterwards, she conducted a project financed by CERGE-EI (Prague) and Global Development Network (GDN), Children, labour and education in 19th Century Romania: the construction of a working class.