How to Find (Rural) Children in a Thesis

How to Find (Rural) Children in a Thesis

Different ways of contemplating the complex framework of ruralness have been growing notably in strength in the field of historiography, together with notions of rural transformations and the changing bonds between the rural and urban worlds. These new ways of thinking take into account changes that have generated specific impact in the realities in Latin America, where the countryside has had (and continues to have) a strong influence. Within this scenario, and in an academic context of renewed sensitivity to story, experience and emotions, a specific outline has taken shape for studying rural subjects. But not for all of them.

If something should be evident to those of us who study these issues, it is that childhood is among the least visible aspects of the rural past.

It is particularly odd that, in the historicizing of the Latin American countryside, which is thronged with hundreds and hundreds of children, it is their voices that are precisely the most silent. In this sense, what follows are some reflective notes about how rural childhood (which still appears behind the curtain on the stage of history) has become a central aspect in my research and what clues I have been able to unravel regarding this suggestive topic.

To a large extent, my Ph.D. studies culminated in the childhood lived out in the countryside. But it started in a quite different place. During the early stages of my dissertation, I was interested in the agricultural settlement policies in the province of Buenos Aires, Argentina during the Peronist period (1946-1955) and during the era of developmentalism in the 1960s. Based on two case studies, I wanted to investigate how the land had been divided, who had received it and what actions settlers took once they started producing.To ask all this in a country with a productive matrix that was and continues to be essentially agrarian made sense. What mattered most to me was whether or not access to land ownership had been successful in rural areas nearest to the cities.

However, one of my first discoveries as a Ph.D. student was that initial proposals quite often sink in the sea of practice. When I started looking for sources, I found empty folders, nonexistent boxes and closed offices. This was a huge disappointment. What option did I have, other than reviewing my strategies? A forced redesign of my methodology led me to resort to the memories of former inhabitants of the settlements. Immersing myself in family albums, neatly kept newspaper clippings, and, above all, long conversations with these country people completely changed my perspective. Still thinking about the settlements, I decided to focus on families rather than on policy.

In this context, with data that reverberated between anecdotes and remnants of past times, I found, without specifically looking for them, children. In the desperate search for clues, sometimes our sources play with us: they divert us and limit our options, but (fortunately) they also open new paths that we would not have imagined travelling. Thus, in the adults who shared with me their valuable memories about the settlements, it was possible to identify the experiences of the children that they had been many years before, when they emigrated with their parents from Japan, Italy, Portugal, Germany, Holland, Poland and so many other places of origin. In fact, most of them were between five and twelve years old when they settled on the land and, given the cycles of life, are now the only ones still alive to tell me about the settlements.

That mosaic of origins, multiple languages and traditions were presented to me, nonetheless, as an incredible album comprised of cutouts and fragments from childhood memories.

The more interviews I conducted, the more I could hear the echoes of distant laughter and outdoor games. I could recompose interviewee’s long walks in the mud and rain to go to school; I could reconstruct their hours working under a sun that gave no respite, sowing a land that only delivered its fruits after inexhaustible effort—an effort from which they, as children, were not exempt.

Children were at family gatherings, social activities and cooperatives. They attended bible study classes that some devoted settler taught them out of pure desire. They painted the facades of their beloved rural schools. They spent their days feeding animals, cooking with their mothers and mending clothes for parents and siblings.

But above all, those older adults who shared these memories with me recreated a whole world based on the interests and perceptions of their childhoods, showing that they, as children, did not always coincide with parents, having different interests as well as their own experiences and demands. However, while children were everywhere, it was difficult to find them; their invisibility in the historical narrative is related to the difficulty of finding sources that allow historians to recreate their steps. If childhood history always involves a challenge, the difficulty multiplies when it comes to rural children. Few traces survive between the furrows, hoes and fences.

Effectively, traces of rural childhood dissipate more easily without personal diaries or written letters to be recovered, without publications or school notebooks preserved the houses scattered among the fields. Although each interviewee offered his or her own childhood impressions, these memories had been mediated by an irrevocable adulthood. The memory of childhood had illuminated the children, but it had limitations. If the veil of childhood could not be removed from the settlements, adulthood traversed the trail of every child that I now proposed to research.

Through archaeological work that involved revisiting the hiding places of the rural world, I put together every fragment I found. Without discarding testimonies, I also gave space to photographs, press releases and some remains of their material culture. It was an arduous but satisfying job. In part, due to the terrible preservation practices of the archives I visited, I was gratefully forced to turn to what resulted to be a fascinating subject that was largely unexplored and incredibly powerful.

Diving into childhood allowed me to give visibility to a specific group of children and to begin tracing their realities, which was in itself a valid objective. This made it possible to find regularities in daily routines, spaces of circulation, tasks divided by age rather than by gender, ways of adapting to new space, as well as discovering different practices of recreation and sociability in connection with a nearby city, which was, at the same time, distant. 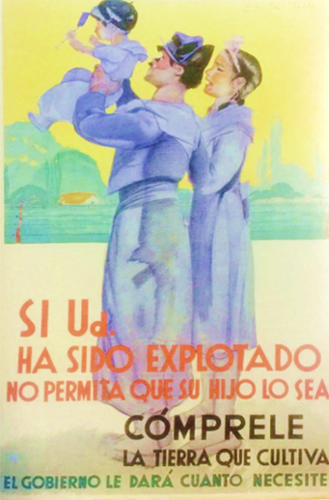 Focusing on children also allowed me to understand other issues. For example, the role that children fulfilled both in a discursive and practical sense in settlement policies. A Peronist propaganda poster indicates with a clear pedagogical tone: "If you have been exploited, don’t allow the same to happen to your child. Buy him the land that you work” (Image 2) The use of childhood as way to engage adults is wonderful in this discourse and, in practice, children served as a way of scoring points on applications to obtain lands. Childhood was not a marginal issue in any sense. Therefore, including the younger groups within the settlements also helped me to understand families’ productive dynamics and their intradomestic strategies, as well as their patterns of consumption and reproduction. Children illuminated both themselves and a scenario that transcended them.

In addition to the corpus of interviews, eventually I was also able to find official sources that allowed me to recompose the world of the settlements by focusing on families and children. In the end, rather than finished products, these are milestones that indicate the path that has been traced.

So, what did I learn from the history of rural children in this process? Undoubtedly, it is a canvas with many missing strands. More than an insurmountable limitation, this particularity regarding sources should become a challenge to design strategies for recovering, producing and conserving data in order to elaborate continuous perspectives. Once again, it is necessary to point out the strong persistence of agrarian, androcentric and adult-centric perspectives on rural issues, including in the past. As I said at the beginning, although rural history has begun to revise its perspectives over the past several years and give space to subjects—including women and adolescents in particular—children continue to lag far behind. Adultism may be one of the most difficult historiographic veils to dismantle. However, by adding the immanent urban bias within research to the equation, we can find very interesting intersections to consider historical centralities and marginalities.

So far, and especially in Latin America, there is still work to be done to transcend the most widespread views in which rural children are immersed in a bucolic and traditionalist discourse, where they appear as a future rather than a present, as promises of the continuity of a lifestyle seeking to preserve itself in the face of an irrepressible urbanization and industrialization (at least in much of the western world). These children are seen, above all, as existences on hold, in the process of growing up.

In this regard, perspectives can be identified that obscure their figures to the point of invisibilization: they are seen as sons or daughters of settlers, of tenants, of peons; perhaps as schoolchildren or students of rural schools, but these aspects almost always remain outside the prism of traits that reveal their presence in its full expression, their agency. It is still necessary to recompose their stories in different latitudes in order to generate more articulated interpretations capable of transcending the snapshots that each invaluable contribution can generate. At the end of the day, like every effort in the history of childhood, it is a question of fostering retrospective views that steadily reduce the invisibilization of childhood. 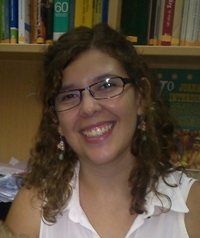 Celeste has a PhD in Social Sciences and Humanities (National University of Quilmes, Argentina) and holds a postdoctoral scholarship (National Council of Scientific and Technical Research). Visiting scholar at the Instituto de Iberoamérica (University of Salamanca, Spain), Università degli Studi di Cassino (Italy) and at the Institut des Hautes Études de L’Amérique Latine (Université Sorbonne Nouvelle – Paris 3, France). Coordinator of the Network of Rural Studies on Family, Childhood and Youth (RER-FIJ). Member of the Network of Studies of the History of Childhood in Latin America (REHIAL). Author of books, chapters, papers and articles in academic journals.