A panel from the Social Science History Association 2019 Annual Meeting

“Why Can’t I Just Disappear?”: Creating a Space of Your Own in Weaver’s Graphic Memoir “Darkroom”

Lila Quintero Weavers autobiographical comic Darkroom. A Memoir in Black and White (2012) presents the authors childhood which was shaped by the experience of migration when her family moved from Argentina to Alabama in the 1960s. A the same time, Darkroom also gives account of important events of the Civil Rights Movement (e.g. the Selma to Montgomery Marches), many of which had taken place in close distance to the protagonist’s home. In this way, the comic not only shows racist violence and protests against racism in the public sphere, but it also reveals the embodied dimension of intersectional power structures in everyday life, like the painful process of female socialization and ordinary racist practices in the 60s, where black citizens face dehumanization and social exclusion. The form of Weaver’s comic opens up spaces for reflection on how childhoods are shaped by historically situated power structures that make the protagonist wish that she could just disappear. Furthermore, Weaver not only documents the racism and gender norms that affected herself, but emphasizes the importance of solidarity with the struggle of black citizens for civil rights. In this way, Darkroom creatively analyzes whose experiences often disappear from history. My paper will show how Weaver harnesses the potential of the comic medium for marginalized individuals to create a space of their own – on the page of the comic and in society at large – through solidarity with others.

"Drawing the Self into History: Character Formation in Historical Graphic Memoir for Taking Turns: Stories from HIV/AIDS Care Unit 371"

In this presentation, the author/artist will describe how a character study of drawing childhood helped to situate her “character” self in the history of a dedicated HIV/AIDS care hospital unit in Chicago during the height of the crisis years.

How is color used to narrate coming out while coming of age? What is the role of color in graphic transgender transition and affirmation stories? This paper explores the form and function of color in LGBTQ+ graphic memoirs and novels from an intersectional perspective. Ever since Alison Bechdel published “Fun Home” in 2007 to both popular and critical acclaim, there has been a strong LGBTQ+ presence in graphic memoirs and novels. Color, however, has remained an undertheorized element of these novels.

My recent foray into color as a narrative and visual device in graphic storytelling builds on a long-standing research interest in the symbiotic relationship between gender and color in children’s picture books. I will share some preliminary thoughts on how color attaches to narratives and markers of gender, sexuality, class and race. From the rejection of anything pink signaling the young protagonists’ disidentification with heterosexual femininity in „Fun Home“ or Liz Prince’s „Tomboy“ (2014) to the different blue tints, meanings and affects in Julie Maroh’s „Blue is the Warmest Color“ (2010), I will trace the use of color as a short hand and a label, as a way for a protagonist to dis/identify with social norms, and as a technique to grab the readers’ attention and evoke an emotional response. Indeed, colors are readily associated with feelings, and feelings with bodily sensations. In Beldan Sezen’s “Snapshots of a Girl” (2015), for example, colors reflect emotional states, cooler tones indicating feelings of boredom, sadness or reflection, and warmer hues suggesting intense anger, passion or joy. Analyzing color in graphic memoirs and novels may give us a glimpse at how gender and sexual dis/identifications are narrated in ways that words or more conventional narrative panels cannot. 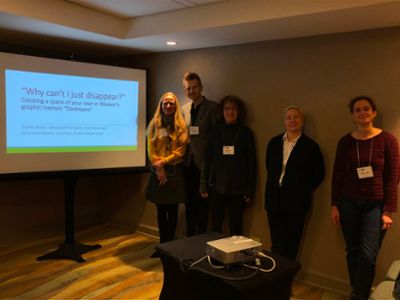 “Representing and Documenting the Spaces of Childhood in Graphic Memoirs”

Personal narratives that recall childhood and youth have long fascinated me as a pathway into the complex history of social relations and into the construction of social identities and subjectivities as shaped during childhood and youth. Recently I have become interested in specific questions about the process of remembering that is built into autobiographical projects. How do authors call to mind childhood memories, document them, and relay them in ways that make them credible to readers? How is memory itself structured in and by the same social and cultural relations that the stories in turn document? These newer questions came to me not from reading conventional autobiographies, but from the surprise of “reading” graphic memoirs. This genre began to flourish only in the late twentieth century, and so the particular histories of childhood and subject development it can inform are those of more recent times. However, the genre has also gone global, so broad comparisons of visual representations of childhood are possible. This paper will examine a selection of graphic memoirs by authors born between 1945 and 1960 in different global regions (the U.S., South Africa, and Southeast Asia). It will examine how these authors go about reconstructing and documenting their childhood memories through images, and how their varied ways of representing the spaces of childhood located them in their different global-historical contexts.

Comments from the Chair

Sophie Bürgi is a PhD student at the University of Basel (Switzerland). Her PhD project is on the topic of smells in graphic memoirs. Sophie has a B.A. and an M.A. in Gender Studies and German Literature of Basel University. From 2015-2016, she co-led a research project about academic excellence at the University of Basel. In this project, she did interviews with university members, asking what effect the imperative of academic excellence has on their working conditions and their life in the academia. In 2018, she has taught courses on feminist epistemology and on methods to analyze comics with a gender perspective. Apart from her work at university, Sophie is also guiding city tours that focus on women's and gender history in Basel.

MK Czerwiec is a nurse, cartoonist, and educator who uses comics to reflect on the complexities of illness and caregiving. She is the creator of Taking Turns: Stories from HIV/AIDS Care Unit 371 (Penn State University Press, 2017) and a co-author of Graphic Medicine Manifesto (also PSU Press, 2014). She co-manages GraphicMedicine.org. Her next book will be the edited anthology Menopause: A Comic Treatment. (PSU Press, 2020).

A historian by training, Dr. Dominique Grisard teaches Gender Studies at the University of Basel, Switzerland and directs the Swiss Center for Social Research. She is presently finishing a book-length project on “Pink” which weaves a history of gender, sexuality and whiteness through and around color. Together with Andrea Zimmermann she conceived “The Art of Intervention” research and events platform and was just grant a pilot project to research gender relations in Swiss cultural institutions. Long standing research interests are the history of intimacies and sexualities, girl* cultures, nineteenth- through twenty-first century European prison cultures, as well as 1970s left-wing political activism.

Grisard has published widely on left-wing terrorism in 1970s Europe and women’s violence and female political prisoners in Switzerland. More recently she has published on the pink triangle, lgbtq+ historiography, and the use of pink in prisons, on the sexualization and pinkification of girl culture, and on princess boys. Grisard is the author of Gendering Terror (2011), a history of (counter)terrorism in 1970s Switzerland and Germany, and the editor of three anthologies on gender theory: Verschieden Sein (2013), Gender in Motion (2007), and Gender and Knowledge (2004).

Mary Jo Maynes is a Professor of History at the University of Minnesota. She is a historian of Modern Europe with interests in comparative and world history. Her work explores the social and cultural history of the family, gender and generational relations, class dynamics, and personal narratives. Her books include The Family: A World History (Oxford, 2012), co-authored with Ann Waltner; Telling Stories: The Use of Personal Narratives in the Social Sciences and History (Cornell, 2008), co-authored with Jennifer Pierce and Barbara Laslett; and Secret Gardens, Satanic Mills: Placing Girls in European History (Indiana, 2004), co-edited with Birgitte Søland and Christina Benninghaus. She is currently co-editing an anthology entitled: Children and Youth as Subjects, Objects, Agents that will be published in 2020, and finishing her book that will possibly be entitled: Making History While Young and Female: Girls in Europe's Age of Revolutions.

Dr. Mateusz Świetlicki is an Assistant Professor in the Department of American Literature and Culture (Institute of English Studies, University of Wrocław). He is a founding member of the Centre for Research on Children’s and Young Adult Literature (Faculty of Letters, University of Wrocław). He was a Fulbright scholar at the University of Illinois at Chicago (2018) and was awarded fellowships at Taras Shevchenko National University of Kyiv (2014) and Harvard University (2012). His first book, When (Do) Boys Become Men? Masculinity as a Project in Serhiy Zhadan’s Fiction, was published in 2016. He specializes in North American and Ukrainian studies. His expertise is contemporary children’s and YA literature and culture, as well as popular culture and film. He has taught American literature, film, and popular culture at the University of Wrocław and the University of Illinois at Chicago. He is currently working on a book project on memory in Canadian children’s literature. He is a representative for the Childhood & Youth Network of the Social Science History Association and a member of International Research Society for Children’s Literature.