The Racialization of Children on American Advertising Trade Cards

The Racialization of Children on American Advertising Trade Cards

Within the manageable scholarship on the history of trade cards, little attention has been devoted to the overtly racialized depictions of American consumerism.1 Blacks are almost completely absent from advertisements in the first half of the twentieth century, whereas in the late nineteenth century, these cards often legitimized the new commodity culture by relying on gendered and racialized stereotypes. Many of the racial caricatures instantiate the shifting positions of African Americans in society as well as the changing attitudes towards them after the Civil War. Invoking the most common racial prejudices prevalent at the time was a means to build a relationship between the product and the consumer who was exclusively envisioned as white and middle-class.2 Trade card historian Robert Jay writes:

While references to the specific political attitudes of late nineteen-century Americans were not particularly common in trade card advertising, allusions to their social and racial views certainly were, and to a greater extent here than in any other advertising medium. Racial prejudices of the later nineteenth century have been treated in a variety of historical literature, but surprisingly little attention has been given to the pervasiveness in advertising.3

The representations of Black children and children of color has received even less attention. Yet taking a closer look at these cards allows us to explore how young people were racialized and othered. They were visually excluded from normative assumptions of childhood innocence through their proximity to physical labor on the one hand, and their function to serve as a commentary on race relations on the other.

Stereotypical and grotesque images of African Americans were used not only to decorate the (white) home, but also to advertise all kinds of products, for instance toothpaste, washing powder, pancake mixes, syrups, soap and cleaning devices; thus products relating to hygiene as well as food.4 Commodities such as tobacco and chocolate were construed as coming from “natives,” hence were marketed and packaged with images of brown-skinned

peoples outside of the United States. As I argue elsewhere, cocoa and chocolate evolved into racialized signifiers for Blackness. The association of cocoa with Blackness was not based on a vague similarity of some people’s skin color to the color of an edible product though. Instead, it was based on the imagination of “dark people,” tropical places, and practices that produce chocolate. This association was learned through endless repetition and evolved into appearing “natural”.

According to Roland Barthes, mythologies participate in the making of our world. Myths help us to make sense of our experiences within a culture. It is precisely their function to naturalize the cultural, and thus to make dominant cultural and historical values, attitudes, and beliefs seem entirely “normal,” “natural,” self-evident, and common sense. If one understands chocolate as a myth that is seemingly de-historicized, albeit having a historical context, we begin to recognize that these advertisements conveyed a peaceful plantation setting and thereby mythologizing slavery as an institution free of exploitation and violence. The assumed white consumer is sold a world without contradictions, a mode of consumption in which the existence of non-white people is legitimized by their function to work for white consumers.5 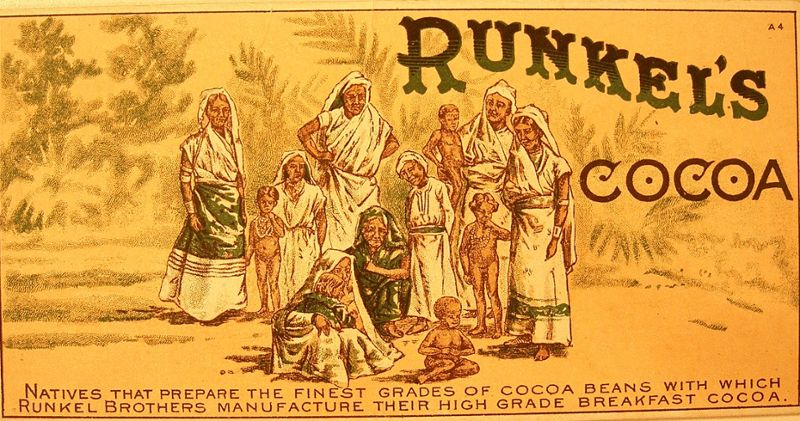 Indeed, the trade card for Runkel’s Cocoa features such a world; it shows a group of brown-skinned women and children, ambiguously located in a tropical elsewhere. The women are dressed in what is supposed to be “traditional clothing,” whereas the children are largely unclothed. Their nakedness underscores their “uncivilized” state of being as well as their exclusion from labor-free, materially secure childhood innocence, a concept that is heavily classed and racialized. According to the text below the image, these “natives,” the women and the children, are the ones who harvested the cocoa beans used to manufacture breakfast cocoa. Purportedly, the knowledge and expertise of indigenous people enables the indulgence of chocolate products in the West. Interestingly, while the text on the backside of most trade cards made no reference to its visuals but focuses on the purity or health benefits of the advertised cocoa product, this one explicitly identifies the women and children on the backside as laborers for the company:

Thousands of miles away in the quaint islands of the tropical oceans, untold numbers of men, women and children are helping us to produce the cup of cocoa that you drank at your breakfast this morning. Runkel facilities are so great and Runkel production is so gigantic, that it is possible to give you at all times a better, a more nourishing, satisfying and delicious cup of breakfast cocoa than any other makers. If you have never tasted Runkel’s, you cannot know real cocoa-delight. If you have tasted it, you will never be satisfied with a substitute.6

It was the work of these women and children, according to the text, that made it possible for the consumers to enjoy this “nourishing, satisfying and delicious” cocoa. The text does not speak to child labor but suggests a never-ending abundance of the workforce. The appeal seems to have been based on the fact that brown-skinned women and children did the hard work that allowed for the pleasurable consumption of a non-essential commodity. The image clarified the racial “Otherness” of these people and affirmed a belief in white supremacy. The children were not depicted as cotton-picking pickaninnies who were visually more familiar to American consumers through the popular “Topsy” character.7 They appeared as sub-humans fated for a life of hard labor, un-childlike little workers who were trapped into a life of servitude on cocoa farms. The image also firmly locates cocoa on, though geographically vague, tropical islands, thereby enhancing the exoticism of their product.

Apart from the genre of the “plantation cards,” the interaction between Black and white children is another visual motif of lithographed trade cards. The following trade card was a popular image used by several chocolate companies to advertise cocoa and other confectionary.8 It features two children sitting on a candy cane that rests on a praline and functions as a seesaw. 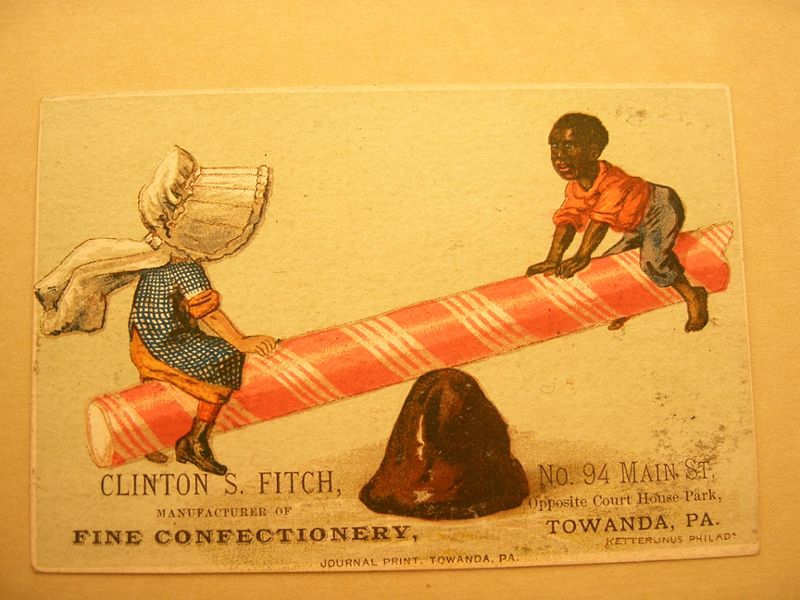 The girl wears a dress, stockings and shoes as well as a huge, oversized bonnet so that the viewer cannot see her face but looks at her back. At the other end of the seesaw, in the air, sits a Black boy who is facing his playmate. He is barefoot and only wears a pair of pants and a shirt. The class distinction is as stark as the racial difference between the two. For some viewers, this interracial encounter may have been socially sanctioned because it is a white girl and a black boy, and not a woman and a man transgressing the color line.  At a time when Jim Crow segregation was still practiced and enforced, an interracial gathering of adults would have been less appropriate or acceptable as an advertising image, and the candy seesaw suggests a certain degree of playfulness and innocence unavailable to adults. The trade card advertises confectionary, a product that is closely associated with romantic feelings and considered a suitable gift given by men to women in a heteronormative context. Thinking about the sexualization of chocolate, however, and its alleged suitability to convey romantic feelings, the scene may indeed hint at a possible love relationship across the color line. Since the image employs sex as well as race by featuring a white girl and a Black boy, it does serve as an example of prohibited pleasures that may have resonated with viewers. In a different reading, the boy may also be seen as moving and slowly sliding down the seesaw towards the girl, thereby visually alluding to an alleged threat on white womanhood at the hands of Black manhood. The representation thereby intriguingly reflects on popular discourses about the relationship between white women and Black men in the post-Emancipation United States – and does so in coded ways through the image of these two children.

What representations of non-white children shared was their inferior class position, visually manifested in the example of child labor on a cocoa farm, but also in the absence of adequate clothing in juxtaposition to a well-dressed white child. The othering of children of color results in them having their belonging into the category of childhood qualified. They were small people who lack some of the signature characteristics of childhood. Viewers of these images were offered many contrasting images of white children with chubby cheeks, tender faces, broad smiles, and neat dressed. As a result, children of color were commodified not as children, but as miniature versions of their specific adult world into which they would soon grow. 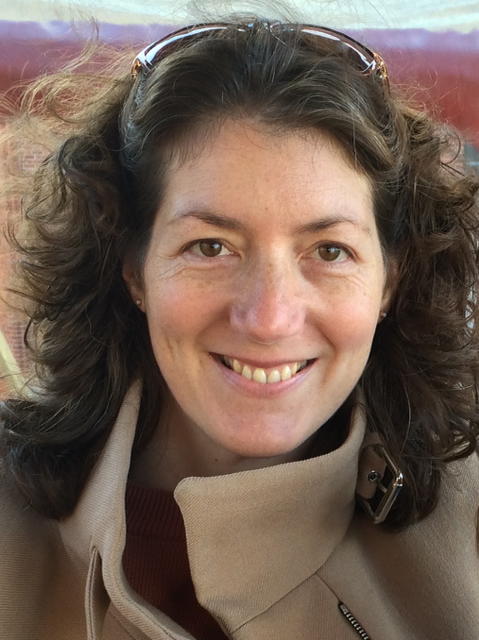 Silke Hackenesch is an associate professor at the Institute for North American History at the University of Cologne. She specializes in 20th century Childhood and Adoption Studies, African American History, Commodity History, and Black Diaspora Studies.

Silke is the author of Chocolate and Blackness: A Cultural History (Campus, 2017). Currently, she is working on a manuscript tentatively titled “Colorblind Love or Racial Responsibility? The Adoption of Black German Children to Postwar America“ which analyzes the contested debates the intercountry adoption of Black German children elicited in the (African) American community, from civil rights organizations, to social work professionals and individual adoption advocates.

Her forthcoming publications include a chapter “Sojourner Truth, Narrative of Sojourner Truth: A Northern Slave(1850),” in Manfred Brocker (ed.), Geschichte des politischen Denkens, Band III: Das 19. Jahrhundert (forthcoming in 2021 with Suhrkamp); an article “The Double Standard: German Shepherds, Race, and Violence”, together with Mieke Roscher, in Jonathan W. Thurston (ed.), Animals and Race (forthcoming in 2021 with Michigan State University Press); and the chapter “Love Across the Color Line? Pearl S. Buck and the Adoption of Afro-German Children after World War II,” in her own edited volume Adopting Children across Race and Nations: Histories and Legacies (forthcoming in 2021 with Ohio State University Press).

Silke serves as a board member for the book series “Imagining Black Europe” at Peter Lang Publishing. Her work has been supported, among others, by the German Academic Exchange Service (DAAD), the Thyssen Foundation, the German Research Foundation (DFG), the Society for the History of Children and Youth (SHCY), the Alliance for the Study of Adoption and Culture (ASAC), and the German Historical Institute in Washington, DC.

8. Among them the Croft, Wilbur & Co. from Philadelphia, WM.G. Fish Fruit & Confectionary from New Bedford, MA, D.J. Laing from Reading, PA, and Moffat & Gugenheim Confectioners and Bakers from New Orleans.