Out of the widening number of toys commonly found in the hands of well-to-do American children in the 19th century, jigsaw puzzles were among the most quickly and completely Americanized playthings. Dating back to the 18th century as toys originally designed for King George III’s children, dissected maps were the first variety of jigsaw puzzles invented. Costly, elegant, and educational, they were meant to teach world geography to the future stewards of the British Empire.1 Since their invention in Europe, dissected maps (beginning with their very name) had been inspired by acts of violence. After all, dissection is surgical, zoomed-in, violent, but also a seemingly scientific project – a metaphor adopted by royal geographers of the British Empire as an ‘objective’ reflection of its relationship to the colonies it ruled over. To borrow from Robin Bernstein, dissected maps ‘scripted’ a two-dimensional, tactile legitimization of the actual acts of colonization by officers of European empires.2

In the US context later on, the violent cutting of the face of the earth regardless of history-long patterns of kinship and geopolitical contingencies allowed American children to play with toys that were the direct outcome of such violence, providing them as future stewards of the rising US Empire with an otherwise unavailable imperial practice field.

As I argue elsewhere,3 the educational appeal of dissected maps lies in the attention they drew in their young players not only to the spatial whole (for example the global stretch of the British Empire) that was dissected, but also to the individual pieces (such as the territorial possessions of the US Empire in the Pacific) that complete that implied imperial order. By engaging children in cartographic minutiae (are the pieces cut along political or natural borders? do the colonies of the British Empire come in the same color-family as the ‘mother country’? is the north placed at the top and the south at the bottom? etc.), dissected maps enabled children to practice being “reverse cartographers,” putting pieces back in their place to reconstruct the whole and to restore the strict imperial order of the world that was scripted by toy-manufacturers in the pieces’ outer edges, color codes, and corresponding angles. On the one hand, dissected maps reflected the spatial, geopolitical order imagined and imposed onto the world by agents of empire. On the other hand, however, children could lose some of the pieces or the interest in playing with them, thus un-doing adults’ original intentions of teaching them that world order. This order could further be subverted if children decided not to complete the puzzle, to cut the pieces into even smaller, unevenly shaped bits, to draw another image on the puzzle’s backside and play with that, put all the pieces in place and frame the puzzle to showcase mastery over them, etc. – all in all overwriting the dissected maps’ original script.

By the beginning of the 19th century, diversified in theme, form, and production techniques, picture puzzles (non-map dissected puzzles) too had emerged, rapidly becoming a favorite toy on both sides of the Atlantic. In the United States, dissected maps and picture puzzles – later on referred to simply as jigsaw puzzles – evolved at pace with the imperatives of an ever-changing geographical expanse and an ever more complex consumer culture, resulting in a plethora of new dissected maps and various images printed and hand-cut as picture puzzles. During the second half of the 19th century, in particular, American toy-manufacturers such as Milton Bradley and McLoughlin Brothers, turned to dissecting scenes from everyday American life: Wild West Shows, scenes from domestic and urban life, and images that reflected on emerging social realities such as the peculiarities of a new social class that was taking shape in the post-emancipation era, that is, the free African American.

In conformity with the common 19th-century values that sanctioned play only when it taught children something useful, the new Americanized puzzles kept their predecessors’ educational purpose intact.

This sensibility can be traced as it was carried over into picture puzzles such as the grossly racist Chopped Up Niggers: Puzzles to Put Together.4

Produced by McLoughlin Brothers and introduced to the market in the latter quarter of the century, Chopped Up Niggers cut into pieces the bodies of seemingly idle, child-like, happy-go-lucky, and tawdrily well-to-do African American men, letting white children play with the pieces before putting them back together. 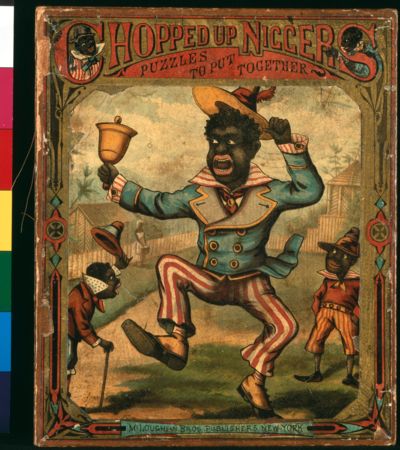 Reminiscent of racially themed, mechanical ‘disappearance puzzles’ designed by the celebrated puzzle-maker Sam Loyd (1841-1911) at the turn of the 20th century, such as The Lost JAP (1897), Get Off the Earth (1898), and Teddy and the Lion (1906),5 Chopped Up Niggers comes across as a blatant attempt, both in nomenclature and in artwork, at safeguarding the supremacy of the Anglo-Saxon white America in the racial chaos of the post-emancipation era. Chopped up as if an inanimate, inert bulk of dead meat or wood, the puzzle places African American bodies at the mercy of the puzzle players, endorsing the violence the young, white owners of the toy were allowed to exercise on free African Americans – both on cardboard and in real life. Reflective of the will to regulate what was conceived by white supremacists as a chaotically new and undesirable racial order, the puzzle transmuted unquestioned obedience as black bodies’ assumed birthmark in the pre-emancipation era, replacing it, seemingly benignly, with disintegrating abeyance in the Reconstruction Era.

By and large, antebellum toys reinforced slavery as the natural order of things, and therefore they did not carry the burden of projecting racial domination under ostensible freedom. In the post-emancipation times, on the other hand, a plaything such as Chopped Up Niggers was a visual/ludic, material constituent of white Americans’ response to emancipation – a point that begs a number of questions: Did the unknown artist of Chopped Up Niggers use the puzzle to underscore unforeseen success of this new social class integrating into the market economy, thus applauding the by-and-large suspected achievements of the Reconstruction Era? Or is the puzzle’s racial hatred-clad-in-fun title intended to dismiss free African Americans’ successes despite, perhaps indeed symptomatic of, a failing economy during one of the century’s worst economic depressions? Did the puzzle serve as a visual reminder of the task of putting back African American bodies and lives together as the white child’s burden? Did white children – finding themselves at the mercy of this puzzle’s disorderliness (its piecemeal nature and its image of disorder) experience an alienating/othering effect? Or did they re-inscribe the toy with a double script of racial alienation toward blackness and age-based identification with infantile, playful black subjects?

Examining the violence at the heart of the scripts that American jigsaw puzzles provided young players, it becomes evident that, whether picking world geography (with its centuries-old imperial order defined by older European, and the rising American, empires) or emerging social realities (recording and commenting on (applauding or thumping), racial tensions in the Reconstruction Era) as topics for educational toys, jigsaw puzzles left the fate of white America’s others in the hands of child players, letting them decide when and in what manner to dissect them or how to restore their wholeness.6

While dissection (of world maps) implied a systematic, surgical, adventurous practice where more-or-less equal significance was assigned to both the whole and its pieces, chopping up (of African American bodies) signified an erratic, everyday chore where neither the puzzle’s whole nor its pieces were dispensed much dignity and self-ness.

As toys with multiple script possibilities, jigsaw puzzles no doubt entailed more play scenarios than mere violence; they recorded passing scenes of everyday American life as topics of significance for child socialization; they invited children to practice tidying up while playing; they complemented school geography lessons with entertainment, etc. By focusing on verbs of violence scripted in jigsaw puzzles, however, historians of childhood can find out more about the many, mostly overseen, ways violence – whether symbolic or literal and whether in the context of othering and racialization on the domestic/national level or as a reflection of America’s geographical insularity, imperialist dividing hand, and spatial indifference toward the global other – was scripted in 19th-century children’s toys in the United States. 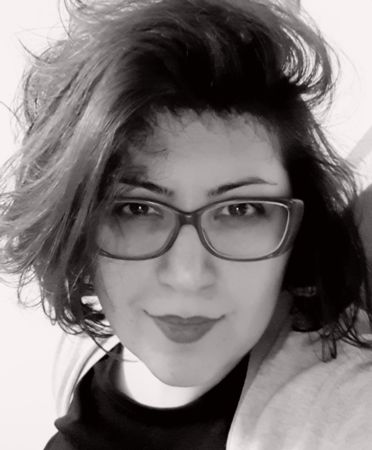 Mahshid Mayar is an assistant professor of American Studies at Bielefeld University, Germany, where she teaches seminars in historical and literary American childhoods, American literature, 19th-century US cultural history, and critical game studies. In her current position, she follows two lines of research: while she engages with 'blank' and 'silence' in American literature (the so-called 'erasure' and 'blackout' literature) for her second-book project, she also conducts research in critical game studies, examining game titles that open dialogues on US history and culture. In her book (forthcoming with the University of North Carolina Press), Mahshid interrogates the cultural geographical formations of the U.S. Empire at the turn of the 20th century as they were negotiated in juvenile periodical press, school geography books, geographical toys, and dissected maps.

2. In the sense that Robin Bernstein assigns to the term, toy-manufacturers provide children with a ‘script’ about the toys’ play possibilities that in turn are met by children who diversify the types of practices (verbs) such scripts allow: imitate the adult world, exercise creativity, express themselves, write their own solo or group play narratives around or away from the original play verbs their toys are inscribed with, etc. Children might stick to the play verbs that the toy-makers’ scripts directly permit, while they most certainly deviate from them too.

5. As the most celebrated American puzzle-maker of the late 19th century, Samuel Loyd was able to earn a living based on his skills as a puzzle-maker and a promoter of his products – for example, as free give-away at presidential campaigns. The disappearance, mechanical puzzles he invented were all racially poignant and centered around a single logic: how to get rid of Americans’ racialized other by turning the puzzle’s handle in a specific direction? For a selection of the puzzles designed by Sam Loyd, see the following: