“The Nation’s Youngest Capitalists:” How the Future Farmers of America Shaped Rural Stratification in the Twentieth Century”

By: Rachael A. Beyer

Welcome to our Featured Student Series. This week, Rachael A. Beyer discusses her research on the Future Farmers of America. Please note: details about each photograph are available here. You can also click each photo and it will direct you to the relevant caption record at the bottom.

When I began conducting interviews with Future Farmers of America alumni for this project, the very first question almost every one of them asked me was “did you wear the jacket?” I came to realize that the question meant more than whether I was an alumna of the 90-year-old organization. Rather, they wanted to know if I had the benefit of an FFA training, an understanding of its culture, and a shared experiential history with them, the person to whom I was listening. As my research continued, I discovered that the rugged blue corduroy jacket, first worn by an Ohio chapter in 1933 before its national adoption the following year, played a central symbolic role to alumni that far surpassed its usefulness as outerwear. 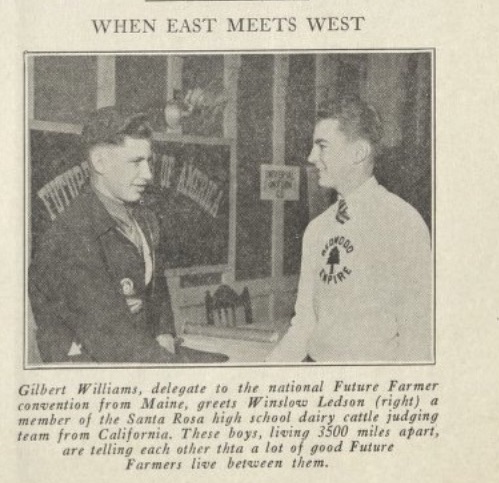 I had flashbacks to my time at Iowa State University as a master’s student, heading to campus for books during the summer, driving by thousands of high school students sporting their jackets at the state convention. The devotion to such a jacket, I remember thinking, must be great if they’ll wear them in August in Iowa. None of this knowledge came to me through experience, for I did not wear the jacket. Although I was a frequent visitor to, and occasional help on, my grandparents’ farm in northwest Iowa, I grew up in a city, attending a high school that did not offer vocational agriculture classes.

I began my dissertation project with the intent to explore the various ways in which rural teenagers acted as producers, rather than consumers, in the postwar era. I completed a draft chapter on the 4-H before moving on to one about the FFA – then began to run into a phrase that left me frustrated over and over again. “Organizations like the 4-H and FFA...” the author would begin, before moving on to discuss 4-H Clubs in depth, but never the FFA. So, then where did the Future Farmers actually fit into this picture? Did it mirror the 4-H Clubs so closely in purpose and product that it could be lumped in with it? Was it just a club or a series of classes – or was it something more? The organization represented by the jacket – the Future Farmers of America, or FFA – is one of a number of organizations created in the early 20th century to support rural or farming communities. Rural youth often participated in both 4-H Clubs and FFA; as adults they joined the American Farm Bureau Federation, attended USDA agricultural extension programs, and took short courses at their land-grant universities. Was the FFA so very different from all of these that it merited its own study? As you will have surmised by now is, yes, it did. What an in-depth exploration of the Future Farmers of America revealed was that not only was it “different enough” to deserve attention, but that the institution itself – its customs, programs, actions, and membership – was unique in what it could do in and, more importantly, for the farming community ... but only for part of it.

As I began to engage with the scholarship – Gabriel Rosenberg, Amrys O. Williams, Nancy Berlage, Debra Reid, and others who examine rural organizations such as 4-H Clubs, Farm Bureau, and Agricultural Extension – I came to realize that FFA was different. Unlike 4-H, it served an older group of students and provided them with cumulative skills and diversified knowledge, it was not blatantly political like the Farm Bureau, and it was administered locally, rather than through regionalized land-grant schools like extension was. I realized that, in FFA, politics were shrouded in its public school placement and its programming and practices influenced the separations of rural classes. In other words, the FFA can be examined as an organization that played a key role in the widening of social class in the rural environment over the course of the twentieth century. In this way, this is not the story of countless farmers from across the nation, coming together to push for sweeping political changes that would serve their economic interests, as was seen with the Populists. Nor is this the story of your average farmer. Rather, it is the story of how distinctive classes hardened in rural America during the twentieth-century and the contributions of these young men to that restructuring. It is about an organization that, from its inception, sought to serve the farmers who understood the economic incentives of agricultural education – and could afford to send their almost-adult sons to high school full-time during an agricultural (and then national) depression. It is the story of why class and politics – to this day – are obscured in the rural environment, hidden behind a blue jacket and an agricultural brotherhood linked to the halcyon days of youth. 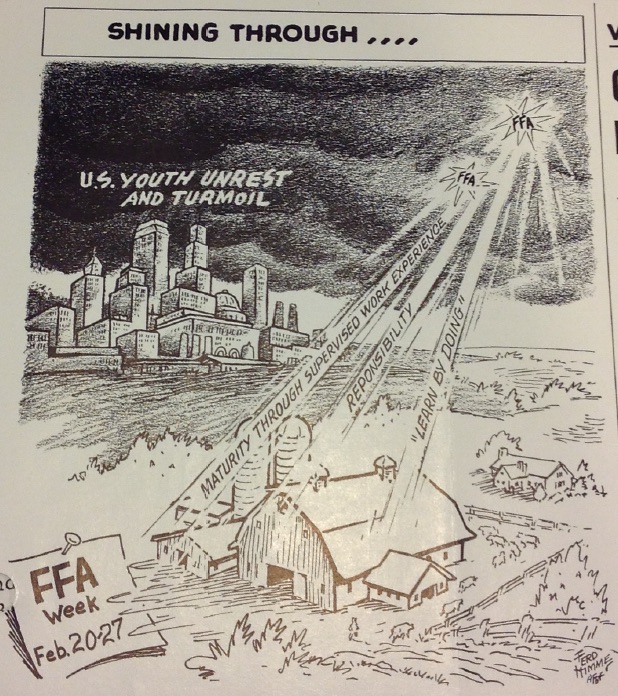 It tells of how a blue jacket masked the frequently fractious political agendas of diverse agricultural producers: creating common ground between farmers of corn and cotton, almond orchardmen, and cattle ranchers, and uniting them into a para-professional organization of agriculturists. Finally, it is the story of how, through social capital, honorary degrees for heads of corporations, and future farmers seeking off-the-land careers in agricultural corporations, the organization developed a national infrastructure that tied farmers, local lending institutions, and international agricultural firms together in a network of interpersonal connections.

In the wake of the 2016 elections, scholars, pundits, and nonrural Americans scrambled to understand what had happened with the rural electorate. I, like many, eagerly read articles and rapidly published tomes that sought to decode rural Americans. Yet, I found absent discussions of class – almost as if it doesn’t exist on the farm. But it does! We understand what working class, middle class, and upper class look like in urban environments – but can we truly say we collectively understand what those classes look like in a remote North Dakota town of 200? The people who live there understand it acutely, but scholarship and public media say little on the subject. This, then, is the question I am pursuing – how rural class divisions widened, what they looked like then (and now), what they mean, and why embedding them in a youth organization was so effective in making all that happen. 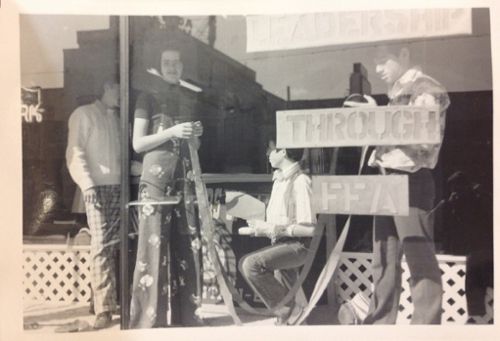 How I seek to answer that comes from my interdisciplinary background. I begin with traditional history sources: manuscript collections, government and corporate documents, FFA publications, and the like, but I draw heavily on research methodologies from sociology, anthropology, and material culture. Oral histories are an important – and super fun! – part of my project. The folks with whom I speak about FFA, agricultural economics, and rural communities are passionate and deeply committed. I am regularly vetted by them as to my background – and whether I have enough of a rural one for them to feel they can legitimately engage with me. I appreciate this because it keeps me grounded. It reminds me that I am writing about real people who, as we all are, are confronted with difficult choices as they journey through a capitalism-bounded life and make them the best they can. Additionally, I draw on a number of ideas that circulate amongst SHCY scholars, including agency, emotion, and pedagogy.

I hope that my work will accomplish several tasks. First, within youth studies, I believe my dissertation will shine a light on how the federal government conceptualizes education, youth, and its purposes in supporting both – as well as how youth mitigate regulation and authority. Next, I hope my study contributes to the history of capitalism in showing how youth organizations participate in a corporate state. Additionally, I expect my work to add to the historiography of agriculture and rural studies by showing how rural class systems strengthen, what they look like, and what they mean. Finally, I would like to be able to offer – in contemporary discourse – a historical viewpoint of America’s rural class system as well as become involved in local or state efforts engaged in improving rural education and decreasing rural youth poverty.

1. “When East Meets West,”1936. The annual National Convention of the FFA provided delegates like Gilbert Williams of Maine (left) and Winslow Ledson of California (right) an opportunity to build fraternal bonds which eroded cross-class relationships in their local communities.

2. “Shining Through,” National FFA Week, 1971. As the nation bemoaned the state of the day’s youth, the Future Farmers offered themselves up as the nation’s ideal. 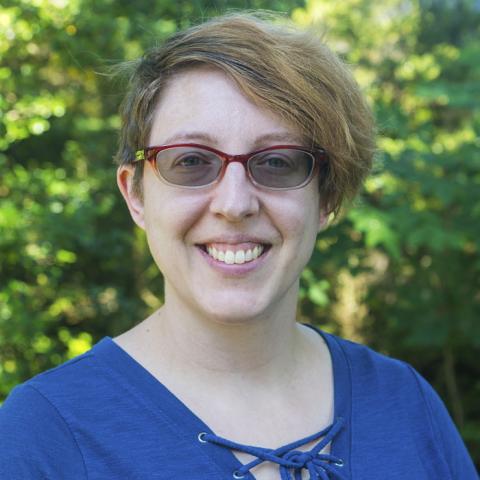 Rachael A. Beyer is a PhD candidate and Scholar in the Hagley Program in the History of Capitalism, Technology, and Culture at the University of Delaware. She has master’s degrees in American history from Iowa State University and the University of Delaware and holds a Certificate of Museum Studies from the latter. Beyer is writing her dissertation on the influence of an agricultural youth organization, the Future Farmers of America, on the expansion of class stratification in twentieth-century rural America. She recently completed a term position as Art Registrar at Haverford College as well as a successful first offering of a new history course designed toward STEM majors: “History of the Future.” In her spare (?) time, she volunteers at the Ebenezer Maxwell Mansion, an historic Victorian home situated in the Germantown neighborhood of Philadelphia. There, Beyer is assisting in the development of a new set of tours, designed to bring the site into engagement with its neighbors.

Selected Presentations and Exhibits by Rachael

“‘As the controversy nears its boiling point’: FFA, Gender, and Race in the 1960s,” paper delivered at the Agricultural History Society Annual Meeting, Washington, DC, June 2019.

“‘Important assets’: teenagers, work, and the family farm in the postwar rural Midwest,” paper delivered at the Ninth Biennial Conference of the Society for the History of Children and Youth (SHCY) at Rutgers University - Camden, New Jersey, June 2017.